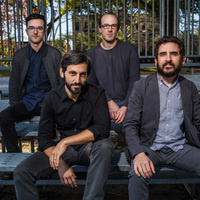 Gutbucket was formed in 1999 by two of its current four members just out of college: Ty Citerman (electric guitar) and Ken Thomson (saxophone). Adam D Gold (drums) would arrive in 2007, and Pat Swoboda (bass) has been touring with the group since 2012.

The band began touring Europe that same year, developing an international fan base; in 2002 Gutbucket debuted at many of Europe’s highly regarded festivals, including Jazz a Vienne, San Sebastian Jazz Festival and more.

In addition to the concert, a roundtable discussion with the band and Associate Professor of Music Ross Feller will take place on Friday from 4:15-5 p.m. in Rosse Hall.