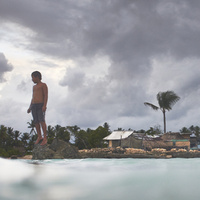 In "Anote's Ark" (2018), the idyllic Pacific nation of Kiribati will be submerged within decades due to climate change. As President Anote Tong passionately fights to save his people and 4,000 years of Kiribati culture, islanders are already feeling the pressure to relocate. Set against international climate negotiations and the fight to recognize climate displacement, "Anote's Ark" presents personal stories that serve as cautionary tales for the entire world.

About the Human Rights Film Series:

A large multidisciplinary team of faculty and students are annually invited to curate selections from more than a dozen award-winning documentaries featured in the Human Rights Watch Film Festival held in NYC each summer. Members of the curatorial team partner with other faculty, administrators, students and community members to lead meaningful post-screening discussions.