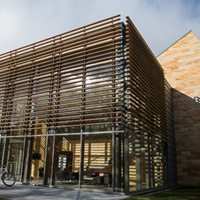 Produced and directed by Mark Kenneth Woods and Michael Yerxa, the documentary "Two Soft Things, Two Hard Thing"s examines LGBTQ issues among the Inuit people living in Nunavut, the northernmost territory in Canada. Wrestling with legacies of colonialization and the ongoing influence of the Catholic Church, communities are struggling to understand gender diversity and homosexuality within their own histories. While some deny that history, others recognize a more inclusive past. Also serving as the title of the film, the traditional Inuktitut language identifies lesbian and gay relationships as "two soft things rubbing together" and "two hard things rubbing together.”

In partnership with the Office of Diversity, Equity and Inclusion (ODEI), this curated series is inspired by themes found in the museum’s fall exhibitions and programs as well as issues important to our campus community. Films selected for this series are meant to underscore the contemporary realities faced by First Nations’ people. We hope the series broadens understanding and challenges assumptions. This screening is also part of the celebration of Indigenous Heritage Month.

Office of Diversity, Equity, and Inclusion