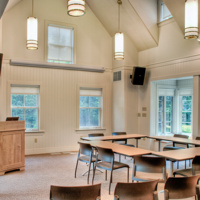 Jacki Mann is a hospice nurse, death and dying doulaoula, and life and death coach who partners with Kokosing Nature Preserve, Kenyon's conservation burial ground. In March of 2018, Jacki began facilitating a Death Cafe for our local community. At a Death Cafe, people — often strangers — gather to eat cake, drink tea and discuss death. The objective is "to increase awareness of death with a view to helping people make the most of their (finite) lives." It is a group directed discussion of death, rather than a grief support or counseling session, with no agenda, objectives or themes.

The idea of a Death Cafe originated in Switzerland where sociologist and anthropologist Bernard Crettaz organized the first café mortel in 2004 . The first Death Cafe in the U.S. was hosted by Lizzy Miles and Maria Johnson in Columbus, Ohio, in 2012. Now you have the opportunity to attend a death cafe right here in Knox County. Additional details can be found in the attached flyer and on Jacki's website: www.inthecircleoflife.com/meet-jacki.

This event is sponsored by the Kokosing Nature Preserve and the Philander Chase Conservancy.