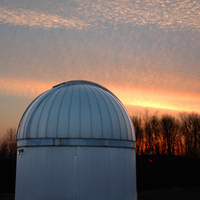 Perched on a hill a few minutes’ walk from campus, the observatory lets astronomy students — and, actually, everyone — get up close and personal with the cosmos. Instrumentation includes a robotic telescope drive system, allowing for computerized pointing, as well as advanced cameras for imaging as well as spectroscopy. Kenyon physics students have used the observatory for projects including nebula imaging, asteroid and variable star light curves, and photometric studies of atmospheric extinction. The observatory is open to the public on the last Friday of every month, with a professor and astronomy students on hand to show visitors views of Venus, Jupiter and Saturn as well as distant star clusters and gaseous nebulae.

Kenyon history factoid: The observatory is named for physics professor Franklin Miller Jr. (1912-2012), an amazing man whose accomplishments ranged from writing an influential textbook, to coaching soccer, to DJing a classical music radio show, to cofounding the local chapter of the NAACP.