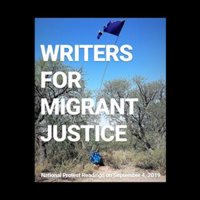 In connection with the national "Writers for Migrant Justice" fundraising events to support the work of Immigrant Families Together (IFT), the Kenyon Review and the English Department are hosting a reading with our new creative writing faculty members Molly McCully Brown, Keija Parssinen, Ira Sukrungruang and Orchid Tierney.

Immigrant Families Together (IFT) was founded in June 2018 in response to the immigration policy separating families at the U.S./Mexico border. They pay bonds for parents in detention and work to reunite them with their children. Additionally, they support over 100 reunited families as they recover from their detention trauma and adjust to life in the U.S. while their asylum cases are adjudicated. All of the IFT volunteers are working pro-bono.

Raised in rural Virginia, Molly McCully Brown is the author of the poetry collection "The Virginia State Colony For Epileptics and Feebleminded" (Persea Books, 2017), which won the 2016 Lexi Rudnitsky First Book Prize and was named a New York Times Critics’ Top Book of 2017, and the forthcoming essay collection "Places I’ve Taken my Body" (Persea Books, 2020). With Susannah Nevison, she is also the coauthor of the poetry collection "In The Field Between Us" (forthcoming from Persea Books, 2020). Brown has been the recipient of the Amy Lowell Poetry Traveling Scholarship, a United States Artists Fellowship, a Civitella Ranieri Foundation Fellowship and the Jeff Baskin Writers Fellowship from the Oxford American magazine. Her poems and essays have appeared in Tin House, Crazyhorse, The New York Times, Ninth Letter, and elsewhere. She is the current Kenyon Review Fellow in Poetry.

Keija Parssinen was born and raised in in Saudi Arabia and then moved with her family to Austin, Texas. Her writing has appeared or is forthcoming in World Literature Today, Slate, The Brooklyn Quarterly, Slice Magazine,  and elsewhere. Her work has been supported by fellowships and residencies from places such as the Corporation of Yaddo, the MacDowell Colony, the Vermont Studio Center, and the Writer’s Colony at Dairy Hollow, where she was a My Time Fellow. She won a Michener-Copernicus award for her debut novel, "The Ruins of Us," which was long-listed for the Chautauqua Prize. Her second novel, "The Unraveling of Mercy Louis," won an Alex Award from the American Library Association and was selected as a Best Book of the Year by the Kansas City Star, Lone Star Literary Life, Missouri Life, and Brazos Bookstore.

Ira Sukrungruang is the author of the memoirs "Southside Buddhist and Talk Thai: The Adventures of Buddhist Boy," the short story collection "The Melting Season," and the poetry collection "In Thailand It Is Night." He is the coeditor of two anthologies on the topic of obesity: "What Are You Looking At? The First Fat Fiction Anthology" and "Scoot Over, Skinny: The Fat Nonfiction Anthology." He is the recipient of the 2015 American Book Award, New York Foundation for the Arts Fellowship in Nonfiction Literature, an Arts and Letters Fellowship, and the Emerging Writer Fellowship. His work has appeared in many literary journals, including Post Road, The Sun, and Creative Nonfiction. He is one of the founding editors of Sweet: A Literary Confection, and taught in the MFA program at University of South Florida.

Orchid Tierney is a poet and scholar from Aotearoa-New Zealand. Her chapbooks include "Brachiation" (Dunedin: Gumtree Press, 2012), "The World in Small Parts" (Chicago: Dancing Girl Press, 2012), "Gallipoli Diaries" (Gausspdf, 2017), and the full length sound translation of "Margery Kemp, Earsay" (Trollthread, 2016). Her first collection, "A Year of Misreading the Wildcats," is due out from The Operating System in 2019. Tierney teaches American and Anglophone poetry with a specific focus on the literatures of the Pacific region. Her wide ranging scholarly interests include environmental humanities, sound studies and the digital humanities. Her current book project investigates the systems and representations of waste and waste management in contemporary poetry and film.