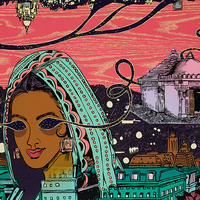 Performances are one hour in length and are free and open to the public.

Ruth Chan is a renowned British composer for theatre, film, television and concert works. Chan is currently creating a new version of "Madame Butterfly" (Opera Up Close) due to premiere in 2020.

Faye Chiao is an award-winning composer of musical theater, opera and concert music. Chiao has been honored with awards from the Presser Foundation, the Puffin Foundation and OPERA America.

Anton Dudley is a playwright, lyricist, librettist and director, whose work has premiered Off-Broadway with Playwrights Realm, Second Stage Theater, Cherry Lane Theater and at Theater Row. Dudley was a finalist for the 2012 Lambda Literary Award in LGBT Drama and is currently an associate professor of drama at Kenyon.

Image: Chitra Ganesh (American, b. 1975) Detail: "City Inside Her" (from the Architects of the Future portfolio), 2014. Woodblock and screenprint. Gift of David Horvitz ’74 and Francie Bishop Good.