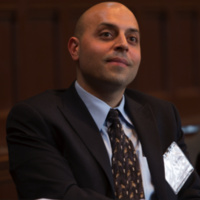 The Audacity of Visibility: LGBTQ Rights in the Middle East/North Africa

The Office of Diversity, Equity, and Inclusion and the Program in Asian and Middle East Studies are proud to host Dr. Sa'ed Atshan to deliver a lecture on LGBTQ+ rights in the Middle East and North Africa.

This lecture will explore the challenges, accomplishments, suffering, and resilience of LGBTQ communities across the Middle East/North Africa region, with attention toward the work being done to build the infrastructure for LGBTQ rights.

Atshan is an assistant professor of peace and conflict studies at Swarthmore College. He previously served as a postdoctoral fellow at the Watson Institute for International Studies at Brown University. He earned a joint Ph.D. in anthropology and Middle Eastern studies, a master's degree in social anthropology from Harvard University, and a Master in Public Policy (MPP) degree from the Harvard Kennedy School. He received a bachelor's degree from Swarthmore in 2006. His research interests are at the intersection of peace and conflict studies, the anthropology of policy, critical development studies and gender and sexuality studies. He has two forthcoming books with Stanford University Press: "Queer Palestine and the Empire of Critique" and "Paradoxes of Humanitarianism: The Social Life of Aid in the Palestinian Territories."