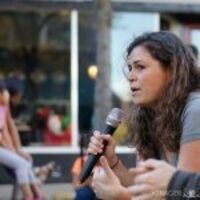 The presentation centers on the work of SOA Watch, a nonviolent grassroots movement working to close the SOA / WHINSEC and similar centers that train state actors such as military, law enforcement and border patrol. They strive to expose, denounce, and end U.S. militarization, oppressive U.S. policies and other forms of state violence in the Americas. SOA Watch acts in solidarity with organizations and movements working for justice and peace throughout the Americas.

Over the past 27 years, SOA Watch has grown to become the largest grassroots Latin America solidarity organization in the United States. In 2016, SOA Watch moved to the U.S. / Mexico borderlands to call attention to militarized U.S. foreign policy as a principal root cause of migration, as well as the devastating impact US security and immigration policy has on refugees, asylum seekers and immigrant families all over the continent. Maria Luisa has been an organizer within the SOA Watch staff collective since 2013. She earned her BA in Political Science from Virginia Commonwealth University, and earned her Master’s in Human Rights and Democratization in Latin America and the Caribbean from the Universidad Nacional de San Martín in Buenos Aires, Argentina. A political refugee in the US, Maria Luisa and her family fled Guatemala during the height of the armed conflict after the 1983 disappearance of her father. Dévora González was born and raised in Los Angeles to migrant parents that found refuge in the city. Being raised in a Central American community, the political and historical knowledge she gathered stemmed from oral history and narratives of migration from her family, friends, and community. The gaps in her understanding led her to California State University, Northridge where she earned a Bachelor’s degree in Central American Studies and Psychology and felt empowered to create positive change in her community.

Sponsored by Associate Professor of Sociology Jennifer Johnson and the Gund Gallery.

free to the public