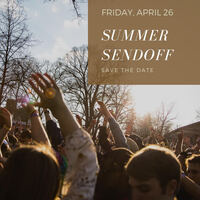 Zaytoven has worked with acts such as Migos, Usher and Future and released his latest album "GloToven" on March 15. Echosmith released a single, "Favorite Sound," on March 8 of this year, but has not released an album since their debut with "Talking Dreams" in 2013. The trio of siblings hails from southern California.

Read more in the Kenyon Collegian.