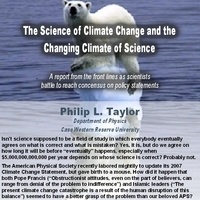 "The Science of Climate Change and the Changing Climate of Science," by Philip L. Taylor

This talk by Philip L. Taylor, from the Department of Physics at Case Western Reserve University, is part of the Physics Colloquium Series.

Abstract: Isn’t science supposed to be a field of study in which everybody eventually agrees on what is correct and what is mistaken? Yes, it is, but do we agree on how long it will be before “eventually” happens, especially when $5,000,000,000,000 per year depends on whose science is correct? Probably not.

The American Physical Society recently labored mightily to update its 2007 Climate Change Statement, but gave birth to a mouse. How did it happen that both Pope Francis (“Obstructionist attitudes, even on the part of believers, can range from denial of the problem to indifference”) and Islamic leaders (“The present climate change catastrophe is a result of the human disruption of this balance”) seemed to have a better grasp of the problem than our beloved APS?  Be amazed!