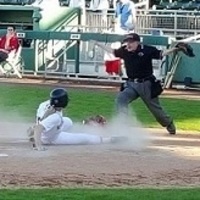 For four decades, umpire Perry Barber has been establishing a lot of "firsts" and "onlys" in baseball, a distinction she regrets as much as appreciates. She’s the only woman so far to umpire major league exhibitions in both the U.S. and Japan and one of only eight women in the US to umpire major league spring training games.

Perry’s also a "Jeopardy!" champion, Mensa member, lone identical twin, published author in her own right as well as the subject of magazine articles, newspaper profiles, books and films. In her sordid past, she was a singer/songwriter/guitarist, the opening act for Bruce Springsteen, Billy Joel, Hall and Oates, Kinky Friedman and the Texas Jewboys, and other music luminaries.

In 2008 Perry assembled the first and (so far) only four-woman crew to umpire a major league spring training game. She was selected as an alternate umpire for the 1996 Olympics in Atlanta, taught umpiring to public school students in New York City while securing paying assignments for them with local associations, and she is the only woman so far to umpire in either the Alaska or the Cape Cod League.

Perry Barber is the first winner of the Society for American Baseball Research’s prestigious Women in Baseball Lifetime Achievement Award and was one of sixteen women worldwide selected to umpire the premier international women’s baseball event of 2018, the Women’s Baseball World Cup.

Perry’s photograph is on display at the Baseball Hall of Fame in Cooperstown and her name is on a plaque on the wall next to it, but she’s not resting on her laurels; instead, she joined the board of the International Women’s Baseball Center while still working tirelessly to recruit and train other women in order to render the phrase "woman umpire" as redundant as "female president" or "woman astrophysicist.” After forty years, she’s still fighting not to be in a league of her own.