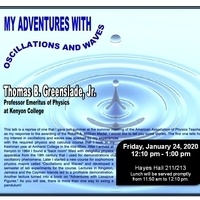 "My Adventures With Oscillations and Waves" by Thomas B. Greenslade, Jr.

The Department of Physics welcomes Thomas B. Greenslade, Jr., professor emeritus of physics at Kenyon.

Abstract:  This talk is a reprise of one that I gave last summer at the summer meeting of the American Association of Physics Teachers as my response to the awarding of the Robert A. Millikan Medal. I would like to tell you some stories. The first one tells how my interest in oscillations and waves was sparked by my experiences with the required physics and calculus course that I took in my freshman year at Amherst College in the mid-fifties. After I arrived at Kenyon in 1964 I found a "back room" filled with delightful physics apparatus from the 19th century that I used for demonstrations of oscillatory phenomena. Later I started a new course for sophomore physics majors called "Oscillations and Waves" and developed a semester of lab experiments for the course. Lectures in Kingston, Jamaica and the Cayman Islands led to a profitable demonstration. Another lecture turned into a book on "Adventures with Lissajous Figures." As you will see, there is more than one way to swing a pendulum!