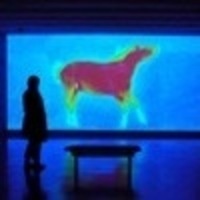 Terike Haapoja is a visual artist based in New York. Her work encompasses installation art, photography, writing and editing. She has published a number of books including "History According to Cattle" (2015).

Haapoja's work also includes founding real and conceptual institutions such as Checkpoint Helsinki and the Museum of Non-Humanity. With a specific focus in encounters with nature, death and other species, her work investigates the existential and political boundaries of our world. Haapoja’s work raises questions about how different structures of exclusion and discrimination function as foundations for identity and culture. The notion of a world that is deeply rooted in the physicality and co-existence of beings and their multiple lifeworlds is at the core of Haapoja’s politically and ethically driven practice. Her work has been exhibited widely in solo and group shows internationally. She represented Finland in the 55th Venice Biennale in 2013 with a solo show in the Nordic Pavilion. Recent exhibitions including Momentum Biennale, Chronus Art Center Shanghai, Kiasma Museum of Contemporary Art Helsinki, ZKM Germany, ISCP New York.