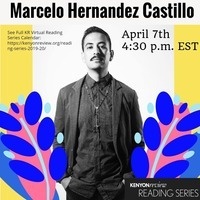 The Kenyon Review and the English Department welcome poet Marcelo Hernandez Castillo for a virtual reading with Q&A via Zoom.

Marcelo Hernandez Castillo is a poet, essayist, translator and immigration advocate. He is the author of "Cenzontle," which was chosen by Brenda Shaughnessy as the winner of the 2017 A. Poulin, Jr. Prize published by BOA editions in 2018, as well as the winner of the GLCA New Writer Award for poetry, the 2019 Golden Poppy Award from the Northern California Independent Booksellers Association, and the Bronze in the FOREWORD INDIE best book of the year. Cenzontle is also a finalist for the Lambda Literary Award, the California Book Award, the Publishing Triangle’s Thom Gunn Award for Gay Poetry, and the Northern California Book Award. Cenzontle was listed among one of NPR’s and the New York Public Library top picks of 2018. His first chapbook "DULCE" won the Drinking Gourd Poetry Prize published by Northwestern University press. His memoir "Children of the Land" is forthcoming from Harper Collins in 2020. His work has been adopted to opera through collaboration with the composer Reinaldo Moya and has appeared or been featured in The New York Times, The Paris Review, The Academy of American Poets, PBS Newshour, Fusion TV, Buzzfeed, Gulf Coast, New England Review, People Magazine, and Indiana Review, among others.

He was born in Zacatecas, Mexico, and immigrated to the California central valley. He is a founding member of the Undocupoets campaign which successfully eliminated citizenship requirements from all major first poetry book prizes in the country and was recognized with the Barnes and Noble Writers for Writers award. He has helped to establish The Undocupoet Fellowship which provides funding to help curb the cost of submissions to journals and contests for undocumented writers. A graduate of the Canto Mundo Latinx Poetry fellowship, he has also received fellowships to attend the Vermont Studio Center and the Squaw Valley Writers Workshop. He teaches at the Ashland Low-Res MFA Program and teaches poetry workshops for incarcerated youth in Northern California.

You may purchase Marcelo's books from the Kenyon Review Bookshop.