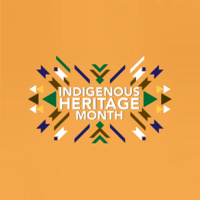 Join the Office of Diversity, Equity, and Inclusion for the keynote event for Indigenous Heritage Month! This year's lecture will be delivered by Stephanie Fryberg of the Department of Psychology from the University of Michigan.

Stephanie A. Fryberg is the University Diversity and Social Transformation Professor of Psychology at the University of Michigan. As a social and cultural psychologist, her primary research focuses on how social representations of race, culture, and social class influence the development of self, psychological well-being, and educational attainment; and on designing interventions that reconfigure educational spaces to improve outcomes for racial minority and low-income students. Select publications include: "The truly diverse faculty: New dialogues in American higher education" (Edited volume with E.J. Martínez), "Cultural models of education and academic performance for Native American and European American students" (with R. Covarrubias & J. Burack), "Unseen disadvantage: How American Universities' focus on independence undermines the academic performance of first-generation college students" (with N.M. Stephens, H.R. Markus, C. Johnson, & R. Covarrubias), :When the world is colorblind, American Indians are invisible: A diversity science approach: (with N.M. Stephens); and :Of warrior chiefs and Indian princesses: The psychological consequences of American Indian mascots on American Indians: (with H.R. Markus, D. Oyserman, & J.M. Stone). In recognition of her work and service to the field, Fryberg received the Society for the Psychological Study of Social Issues Louise Kidder Early Career Award, Otto Klineberg Intercultural and International Relations Award, University of Arizona Five Star Faculty Award, the Society for Personality and Social Psychology Service Award, and in 2011 was inducted into the Multicultural Alumni Hall of Fame at Stanford University. Dr. Fryberg also provided testimony to the U.S. Senate Committee on Indian Affairs regarding the impact of racist stereotypes on Indigenous people, was lead psychologist on an Amicus Brief for Harjo v. Pro-Football, served as an expert witness in the Keepseagle v. U.S. Department of Agriculture class action lawsuit, and currently serves as the lead researcher for Illuminative, a national research-based effort to shift the narrative about and decrease bias toward Native people.