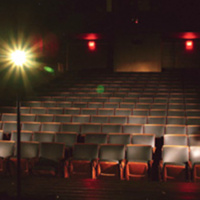 "Gotta Get Down To It" by Jonathan Tazewell

"Gotta Get Down To It" is an original feature film written and directed by Jonathan Tazewell and produced in collaboration with faculty and students through the Kenyon Department of Dance, Drama, and Film. The film tells the story of a young college professor and her students who become embroiled in an intense political protest because of a controversial speaker on campus.

This is Kenyon's first feature film produced by students and faculty as part of the production season, and this early screening will serve as our third Bolton Theater production.

Before the screening on Thursday, April 18, at 6:30 p..m.,  there will be a red carpet reception in the Bolton Greenroom to celebrate the film. The reception is free, open to the public, and sponsored by Kenyon Filmmakers through a generous grant from KCCDF.  Light finger food will be served and guests will have the chance to take photos on Kenyon's own red carpet. Consider dressing for the red carpet (although red carpet attire is not required).

Tickets can be purchased through the Bolton Box Office at 740-427-5546. The office is open from 1-5 p.m. the week before and also an hour before each screening.