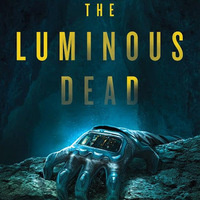 Equipped with an anthropology degree and an interest in the dark and macabre, Caitlin Starling's debut sci-fi novel both lingers and enticingly disturbs. Set in an unexplored cave system on a mining-colony planet, "The Luminous Dead" follows a young woman, Gyre Price, as she navigates dangerous caverns with unforeseeable obstacles while having to trust in someone who is not entirely trustworthy. There's something eerily unsettling about this world — it isn’t just the danger of the dive, or the claustrophobia of the protective suit Gyre wears. Her loneliness and desperation are what truly make Gyre’s experience haunting.

“Starling’s debut is a chilling study in mutual guilt and dependence that will have readers racing toward the conclusion.” —Booklist